This study advances previous efforts towards development of computational systems biology, in silico, methods for biosafety assessment of genetically modified organisms (GMOs). C1 metabolism is a critical molecular system in plants, fungi, and bacteria. In our previous research, critical molecular systems of C1 metabolism were identified and modeled using CytoSolve?, a platform for in silico analysis. In addition, multiple exogenous molecular systems affecting C1 metabolism such as oxidative stress, shikimic acid metabolism, glutathione biosynthesis, etc. were identified. Subsequent research expanded the C1 metabolism computational models to integrate oxidative stress, suggesting glutathione (GSH) depletion. Recent integration of data from the EPSPS genetic modification of Soy, also known as Roundup Ready Soy (RRS), with C1 metabolism predicts similar GSH depletion and HCHO accumulation in RRS. The research herein incorporates molecular systems of glutathione biosynthesis and glyphosate catabolism to expand the extant in silico models of C1 metabolism. The in silico results predict that Organic Soy will have a nearly 250% greater ratio of GSH and GSSG, a measure of glutathione levels, than in RRS that are glyphosate-treated glyphosate-resistant Soy versus the Organic Soy. These predictions also concur with in vivo greenhouse results. This concurrence suggests that these in silico models of C1 metabolism may provide a viable and validated platform for biosafety assessment of GMOs, and aid in selecting rational criteria for informing in vitro and in vivo efforts to more accurately decide in the problem formulation phase whose parameters need to be assessed so that conclusion on “substantial equivalence” or material difference of a GMO and its non-GMO counterpart can be drawn on a well-grounded basis. 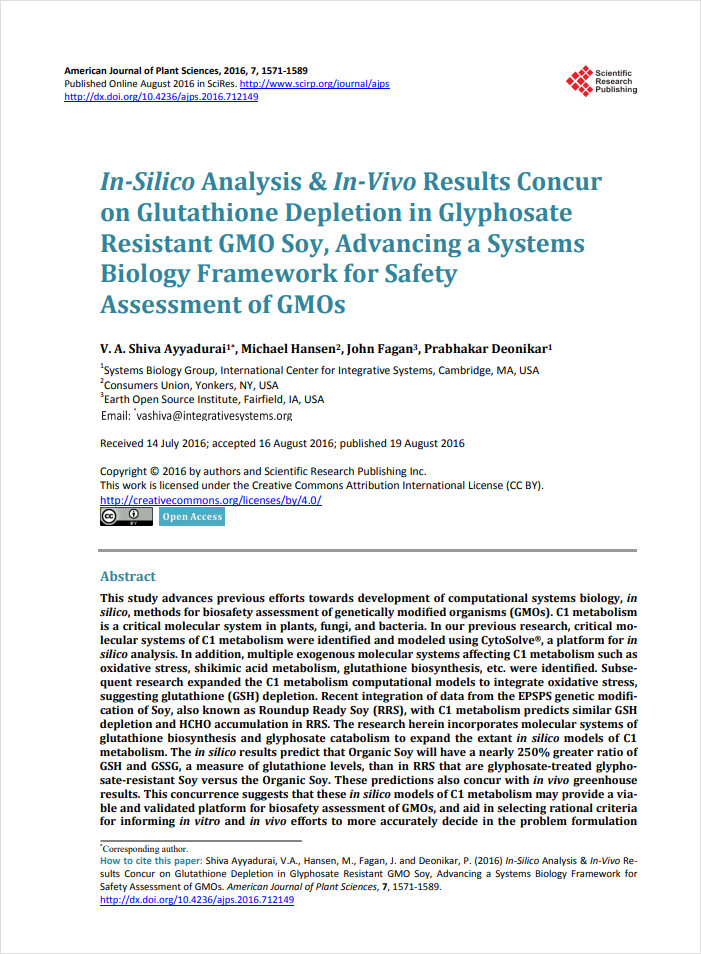